I’ve been thinking about my teachers a lot recently. It has meant so much to me to have studied with some of my very favourite voices in music.

And it started earlier, really. I had great teachers in public school, my first grade teacher for example. And I admired my harpsichord teacher. When he played, the instrument came alive. The room came alive. Coming so early in life, baroque music is one of the deepest layers of my musical memory.

At Gymnasium in Switzerland, I had fantastic teachers, too. I particularly remember my two English teachers, the German teacher, the French teacher. And then, during my high school year in Los Angeles, I had a wonderful classical voice teacher. At the school itself, the jazz ensemble teacher was inspiring. As was the American literature teacher. And well, the arts teacher, too.  It was a good year for me!

Back in Switzerland, after graduating from high school in the US, I finished Gymnasium and started to prepare for professional music education. I took lessons at the Swiss Jazz School in Berne, with Rachel Gould, a fantastic singer and composer who had performed and recorded with Chet Baker. At that time, there was Eugen Irniger teaching the ear training course – a legendary teacher most of the students were at the same time afraid and in awe of, and one of the best teachers in this field. Much of what I do now with my students to develop the ear is rooted in his teaching system. I also continued taking lessons in classical singing, with Ingrid Frauchiger at Berne Conservatory. She made music with her entire instrument – the body – and was also a fantastic piano player. A complete musician.

By the time I was ready to enter full time studies, Rachel had moved to the Netherlands where she taught at the Royal Conservatory of The Hague. After having also visited music universities in the US (The New School for example) I decided that I wanted to continue to study with Rachel – so I moved to Holland. Rachel wanted her students to bring a piano player to the lessons. This is how my twenty-one-year long (and counting) collaboration with Wolfert Brederode started. We were both first year students. Rachel did play the piano when working with students, but she wanted us to start meaningful musical collaborations right from the start – and what a point she had. I loved her phrasing, the way she interpreted standards, her improvisation – and most of all, her voice. One of my favourite records with her singing is A Sip Of Your Touch by Riccardo Del Fra, featuring her composition Do You Feel What I Feel and her singing But Not For Me as well as For All We Know. I remember the atmosphere during her lessons so well. It was all about music. Whatever song she sang, I wanted to sing it too. Whatever advice she gave me, I tried to do my best with it. I had chosen her as my teacher, moved abroad to be guided by her, and never once regretted it.

I had discovered Jeanne Lee’s singing when I worked in a jazz record store in Berne called Be Bop. I somehow got my hands on Jeanne Lee & Ran Blake’s The Newest Sound Around and was thrilled by their music. And then that voice. The texture of it, its breath, its depth. I loved it. When Jeanne Lee performed at the Willisau jazz festival in the early nineties, I called the festival in advance to ask for Jeanne Lee’s contact information, as I wanted to ask her if I could take lessons with her. The festival’s artistic director, Niklaus Troxler, took the phone, and he gave me the number of the hotel Jeanne would be staying at. So when the day of her concert had come, I called the number, and there she was. She told me to come and meet her after the concert. After a wonderful concert, she waited for me at the backstage entrance, smiling her beautiful smile. We talked for a long time. I had just finished my first year of studies in Holland. Some time later, I met her again, backstage in Amsterdam, where she was performing with Reggie Workman’s group. At that point, one of the voice teachers at the Royal Conservatory had left, and the position was open. I jokingly asked her if she’d want to apply. “Why not?” she replied with a smile. She applied, got the position, and moved from New York City to The Hague. And I ended up studying with my favourite voice in jazz. Her lessons were deep, full of music and dance. There are so many moments that I remember as if they happened today. The lessons sometimes started a lot later than scheduled, but lasted three hours instead of one. And we often ended up having dinner together on the beachside afterwards. I met her children, she came and listened to my concerts, was happy for me when I told her I was going to record for ECM – “It’s the right place for your music!”. She herself is on one of my favourite ECM records, Marion Brown’s Afternoon Of A Georgia Faun. We later became friends and colleagues. I was an assistant teacher for some of the workshops she taught, and she also asked me to be part of her Jeanne Lee Music & Dance Ensemble. Since she passed away in 2000, I have asked myself many times “What would Jeanne say?” when facing difficult decisions. Her mentorship was very important for me. She was giving, caring, and challenging, too. 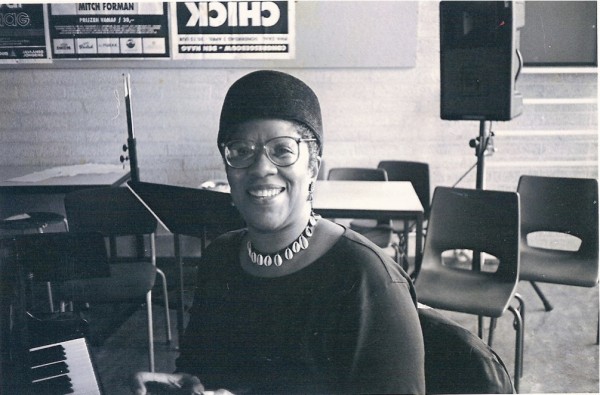 Jeanne Lee during a lesson at the Royal Conservatory, around 1995, photograph by Susanne Abbuehl

I was lucky in life when it comes to teachers. During my studies in Holland, someone mentioned to me how helpful classical Indian singing could be for jazz singers regarding ear training and functional hearing, and gave me the contact of Dr. Indurama Srivastava who taught private lessons in Amsterdam. The lessons were great – the teacher (once more!) having a wonderfully complete approach to music. Indu told me I should go and study with Dr. Prabha Atre in Mumbai. And I did! It was love at first sight for me in Mumbai. Touching down for the first time, without any particular reason at all, I felt home. And this never changed during my many stays in Mumbai. I have never met a more complete musician than Prabha Atre. A truly unique combination of a deep musical gift, unconditional dedication and hard work, resulted in a free flow of ideas and emotion when she sang. I saw her sing live several times, and listened to her recordings over and over again. I found something in her music I didn’t find anywhere else. The lessons with her were intense and challenging, and although it was never my intention to become professional in this field (how could it have been? It would have simply been impossible) her music found its way into my musical thinking and my aim in general.

Well, there’s one more teacher I’d like to mention. When I started to compose, I was still studying at the Conservatory. Among many other lessons, there was a class in analysis of 20th century music. The teacher was Dutch composer Diderik Wagenaar. He was able to get the entire class into the subject by his own enthusiasm and great knowledge of the matter. I later took up lessons in composition with him. Although at times overwhelming, the mass and depth of his knowledge was so inspiring. He is not only a fantastic composer with an impressive body of work, but also really into the music of the composers that came before him. Moreover, he is very humble and modest. Thanks to him I was able to get to know a bit more about the music of Stravinsky, Berio (whom I got to meet in Spoleto thanks to Diderik) and Webern.